Does Your Cat Eat Cat Litter?

Why do cats eat cat litter?

Cats eat cat litter for a variety of reasons. Some are simply driven by curiosity, and occasionally eat cat litter by mistake. Some are caused by certain health problems of the cat, and the cat may eat cat litter more than once. In this case, preventing cats from eating cat litter is one aspect, and more importantly, solving the cat's own problems.

When cats are young, like toddlers, they are curious about everything they see. It is common for kittens to eat cat litter and other non-food items such as paper, plastic, wire, and anything else they can find. If you have a kitten under three months to eat cat litter, it may just be curious. Some kittens do this if they are weaned too early. Just like babies, they will put anything in their mouths. While this behavior is very common in kittens, it doesn't mean it's safe.

If your cat is over three months old and still eats cat litter regularly, it may be because it has anemia. As in humans, one of the main symptoms of anemia is pica. Pica is the urge to eat nonfood items, such as paper, plastic, blankets, rugs, or cat litter. Anemia is a decrease in the number of red blood cells due to blood loss, insufficient production of red blood cells, or destruction of red blood cells. Different types of anemia can be divided into two categories: regenerative anemia and non-regenerative anemia. Additionally, if your cat has anemia, it may also show other symptoms such as pale gums, weakness, loss of appetite, and fatigue. If the above symptoms occur, you need to consult a veterinarian immediately. After the cat's anemia symptoms improve, the cat will naturally stop eating cat litter. If your cat is deficient in certain vitamins or minerals, it may eat something non-food, such as cat litter, as an instinct to get those nutrients. Cats have a variety of vitamin and mineral deficiencies, some of which include: vitamin A deficiency, vitamin B1 deficiency, magnesium deficiency, sodium deficiency, taurine deficiency, etc. Maybe cat litter does not have these vitamins or minerals. Cats eat it because they want to get these nutrients and instinctively find and eat things other than food. Cat litter is something that cats use every day, coupled with its bright colors and tangy fragrance, making cat litter an easy choice for cats to eat.

What are the dangers of cats eating cat litter?

Compared with other hazards, vomiting is a more common symptom, and it is also a less harmful symptom. Although vomiting is an adverse reaction of cats after swallowing foreign objects, it is also a self-protection behavior. Vomiting will help the cat to carry the swallowed foreign objects out of the body and avoid more serious harm. If the cat does not have other adverse reactions after vomiting and does not vomit repeatedly, we do not need to worry too much. We only need to pay attention to prevent the cat from eating the cat litter again.

Some cat litter is made of waste paper, sawdust, and other wastes through secondary utilization, and some cat litter is made of non-degradable minerals such as bentonite and silica. These are indigestible by cats, causing stomach discomfort after the cat eats them, resulting in the inability to eat other foods. Moreover, cat litter cannot be digested, so it will always exist in the stomach, which will destroy the flora in the stomach and intestines, causing imbalance and leading to a variety of digestive system diseases.

Food poisoning is a dangerous symptom, and in severe cases, it can take the life of a cat. The substances that cause food poisoning are generally various harmful chemical additives added to cat litter. These must be looked at when buying cat litter. Even if a cat accidentally ingests a small amount of this cat litter, it may have serious consequences.

How to deal with cats eating cat litter?

It is true that cats eating cat litter can cause different degrees of health problems, but we can't accompany the cat all the time to protect it. You don't know when it will eat cat litter, so is there any way we can prevent them from doing so? Or when you find that the cat has eaten cat litter, how should we deal with it properly? 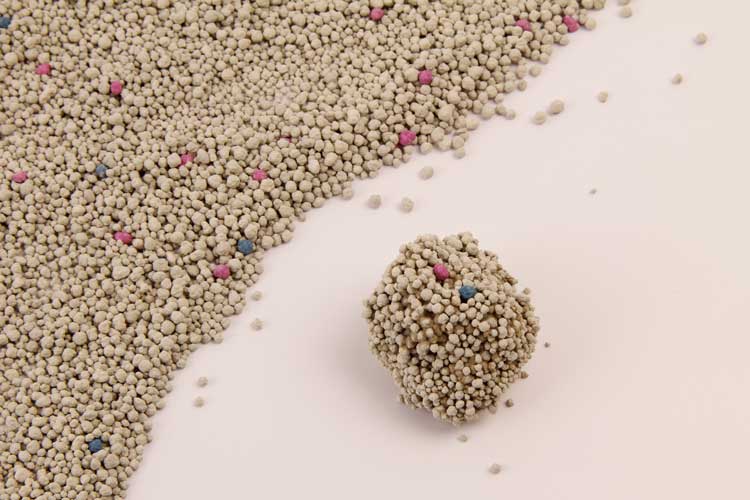 If your cat particularly likes a certain cat litter and prefers to eat it, then you can change the cat litter. If your kitten has not changed the bad habit of eating cat litter for a while, you can replace it with safer cat litter such as tofu cat litter. Tofu cat litter is made of pea fiber, and cat owners don't have to worry too much about kittens eating one or two occasionally.

In fact, cats may be too bored, so they think about playing with cat litter. It is possible to accidentally eat cat litter while playing, and even develop a bad habit of eating cat litter over time. Then we can play more with the cat after getting off work and when we have time and buy more toys that cats are interested in, such as funny cat sticks, cat climbing frames, cat scratching boards, etc. Or tease the cat with some small snacks, such as canned nutrition, candy, etc. The cat's life is rich and colorful, and it will no longer play with cat litter.

Seek a veterinarian in time

If your cat often eats cat litter and ignores your stop, it is recommended that you promptly ask a veterinarian to help the cat check its body. Cats may develop pica symptoms due to anemia or other diseases. Leaving this situation alone will not only cause a physical burden to the cat due to the long-term and a large amount of eating cat litter but also delay the cat's condition. After the veterinarian's targeted treatment, as the disease is cured, the cat will stop eating cat litter.

Cats eat cat litter, which is particularly harmful. As an owner, you should train your cat not to eat cat litter casually since it is young. Every day, you should choose healthy food to feed regularly and quantitatively, so that pet cats can develop good living habits. Finally, what cat owners need to pay attention to is that the location of the cat litter box cannot be too close to the place to play, otherwise the cat will think that the litter box can also be played with. If You Have Not Noticed These Problems When Using Cat Litter...

We all know need to prepare cat litter for cats. In fact, we also need to notice... What to Do with Used Cat Litter and Excess Cat Litter

Cat litter is a necessity and fast-moving consumer good for cats. What to do wit...